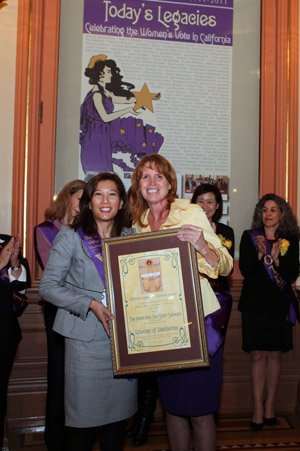 California Chief Justice Tani Cantil-Sakauye accepts her award as a “Woman of Distinction” from the Chair of the Legislative Women’s Caucus Noreen Evans.

Justice Tani Cantil-Sakauye is the first Asian-Filipina American and the second woman to serve as the state's Chief Justice.   She was appointed as Chief Justice on July 22, 2010 and has served for more than 20 years on California appellate and trial courts.  In 1997, she established and presided over the first court in Sacramento dedicated solely to domestic violence issues.