What is Title IX?*

No person in the United States shall, on the basis of sex, be excluded from participation in, be denied the benefits of, or be subjected to discrimination under any education program or activity receiving federal financial assistance.

Over forty-years ago, Congress passed Title IX of the Education Amendments of 1972 to ensure equal opportunity in education for all students, from kindergarten through postgraduate school, regardless of sex. Girls and women have made great strides in education since the passage of Title IX. The days when girls were blatantly told that they couldn't take shop or advanced math are, for the most part, gone. Females make up a growing proportion of students in math, science, and technology-related fields, particularly in the life sciences. Given greater opportunities to participate in athletics, they are not doing so in record numbers.  They have also made gains in career and technical education at the high school and community college levels. Time and again, girls and women have proved that they have the interest and aptitude to succeed in areas once considered the exclusive purview of males.

Despite tremendous progress, however, challenges to equality in education still exist. Women’s advancement in some areas, including computer science and engineering, has stagnated or even declined in recent years. Pregnant and parenting students are frequently subjected to unlawful policies and practices that deter them from completing their education. Nearly half of all middle and high school students report being sexually harassed in school. And single-sex classrooms often cater to stereotypes about how boys and girls learn, to the detriment of both sexes.

These and other challenges affect the ability of all students—male and female—to get the most out of their education. This in turn endangers the ability of U.S. schools and universities to produce skilled workers who can succeed in an increasingly competitive global marketplace.

The share of science and math PhDs for women has grown from 11 percent to about 40 percent since the law passed. By 2005, women students comprised almost three out of five undergraduates, with some of this growth due to increased access for women of color (who have more than doubled their share of degrees since 1977, when they earned just over 10 percent).

In graduate and professional schools, too, young women have enjoyed far greater access thanks to Title IX.  In 1970, women earned only 14 percent of doctoral degrees, but today earn nearly half.  Yet women's doctorates are still not distributed evenly across disciplines: They range from a low of about 19 percent in engineering and engineering technologies to a high of about 71 percent in psychology.

The most dramatic gains are in the professional schools.  In 1971, just about 1 of 100 dental school graduates were women, while in 2005 that number grew nearly fortyfold.  In medical schools the numbers jumped from less than 10 percent to nearly 50 percent, and law school numbers from about 7 percent to nearly 49 percent. 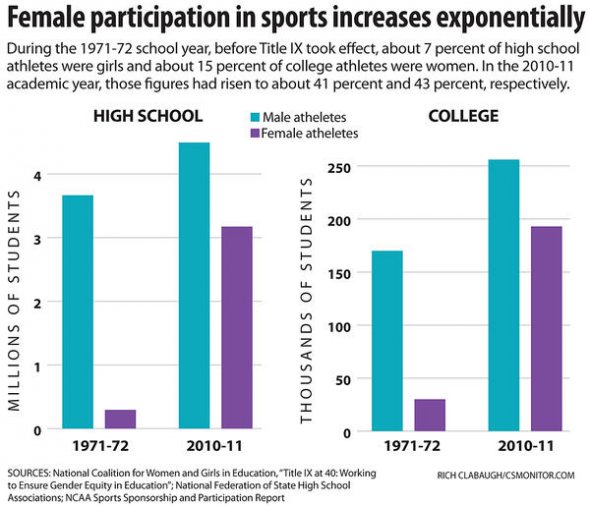 There were almost no college athletic scholarships for women 40 years ago.  Now, almost 200,000 women play college sports, and many of those athletes get scholarships.

* For more information on Title IX, read the full report by the National Coalition for Women and Girls in Education (NCWGE). Title IX at 40: Working to Ensure Gender Equity in Education. Washington, DC: NCWGE, 2012.

On August 12, 2014 the Senate Judiciary Committee held an informational hearing on Title IX. The purpose of the hearing was to focus on the compliance efforts being made by both advocates and in schools. Title IX is essential as it seeks to ensure girls are not subject to discrimination. It is crucial for high schools to comply and promote Title IX and its principles. At the hearing advocates reported on schools' compliance with Title IX and school representatives discussed, from their perspective, how they comply with Title IX, focusing on pregnant and parenting students, sexual harassment, and athletics, and obstacles they face in their efforts to do so. We also heard about innovative community efforts to help ensure compliance with Title IX.