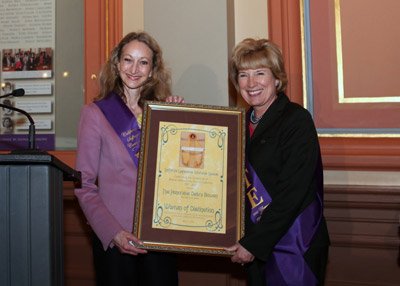 Secretary of State Debra Bowen accepts her award as a “Woman of Distinction” from Senator Jean Fuller with the Legislative Women’s Caucus.

After serving in the legislature for 14 years, Debra Bowen became only the second woman to ever be elected Secretary of State.  She is a pioneer in open government reform, elections integrity, and personal privacy rights and only the sixth woman elected to a statewide constitutional office.  She has always been a champion for women’s rights, even serving as Chair of the Women’s Caucus while she was in the Assembly.