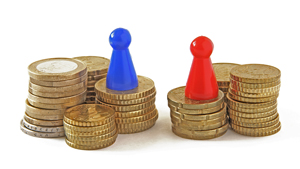 The gender wage gap in California contributes to its high rate of poverty and adversly affects women in nearly every field, no matter their income or educatinoal status.  In 2013, a woman in California working full time, year-round earned a median of 85 cents for every dollar a man earned.1  This gap is even greater for women of color.  For example, Latinas in California make only 44 cents for every dollar a white man makes - one of the worst Latina wage gaps in the nation.2  As a group, full-time working women in California lose over $33 billion dollars each year due to the wage gap.3

1National Partnership for Women and Families: California Women and the Wage Gap, 2013.

2National Partnership for Women and Families: Latinas and the Wage Gap, 2015.

The California Fair Pay Act will strengthen the state's existing equal pay law by eliminating loopholes that prevent effective enforcement and empowering employees to discuss pay without fear of retaliation.

After Governor Jerry Brown signs SB 358, California now has one of the toughest equal pay laws in the country.

LWC members and advocates support SB 358 before the bill is taken up on the Assembly Floor.

Democratic members of the California's Legislative Women's Caucus announce plans for legislation to address the wage gap that women face at work.

What is the Gender-Based Wage Gap Where You Live?