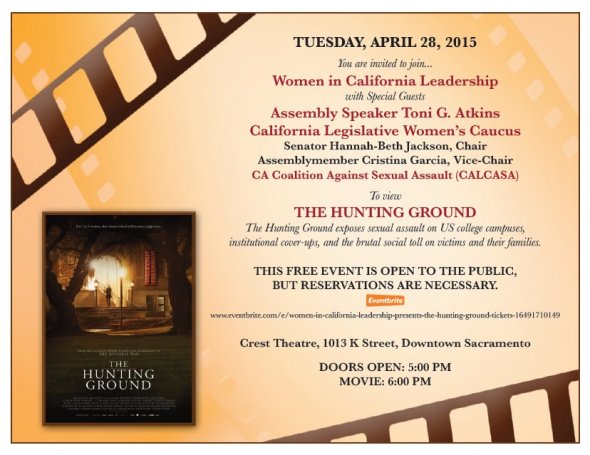 Women in California Leadership with the Legislative Women's Caucus hosted a screening of "The Hunting Ground," a startling exposé of rape crimes on U.S. College Campuses, their institutional cover-ups and the devastating toll they take on students and their families.  Weaving together verité footage and first-person testimonies, the film follows the lives of several undergraduate assault survivors as they attempt to pursue - despite incredible push back, harassment, and traumatic aftermath - both their education and justice.

Learn more about the movie here.

On March 7, 2013, the Campus Sexual Violence Elimination (SaVE) Act was enacted as part of the reauthorization of the federal Violence Against Women Act (VAWA). Campus SaVE amended the Jeanne Clery Disclosure of Campus Security Policy and Campus Crime Statistics Act (Clery Act) to extend additional rights to campus victims of sexual violence, dating violence, domestic violence, and stalking.

Under the revised Clery Act, there is now a mandate for every college campus to include a statement of policy in its Annual Security Report regarding subjects that include: prevention and education programs; crime reporting procedures; possible sanctions and protective measures in disciplinary proceedings; recommended procedures for victims; the institution’s disciplinary action process; and written notifications to students about existing counseling, health, mental health, victim advocacy, legal assistance, and other on-campus and community services available.

Although the new federal requirements, communication from the U.S. Department of Education (DOE) Office for Civil Rights, and documents released by the U.S. Department of Justice (DOJ) have provided general guidance for colleges and universities on how to protect and provide services and support for sexual assault victims, there is currently a lack of uniform standards.

This uneven application of federal laws was most recently highlighted in President Barack Obama’s release of a memorandum on January 22, 2014, establishing a White House Task Force to Protect Students from Sexual Assault.  Citing that compliance by institutions of higher education is inconsistent and in too many cases inadequate, the directive orders the Office of the Vice President and the White House Council on Women and Girls to lead an interagency effort to address campus rape and sexual assault, including the coordination of federal enforcement efforts and helping colleges and universities meet their legal obligations.  The Task Force will be developing and submitting proposals and recommendations within the next 90 days.

This bill addresses the inconsistent application of federal law and strengthens protections for victims of sexual assault on college campuses by requiring campuses to adopt an affirmative consent standard for the evaluation of complaints, implement comprehensive prevention programs and victim-centered sexual assault response policies and protocols, and form partnerships with on campus and community-based organizations to assist victims with connecting to services. Read the text of the bill here.

This bill will augment high school health curriculum to educate adolescents on sexual assault prevention and the importance of developing positive, healthy relationships in order to reduce assault incidents in the future. Read the text of the bill here.